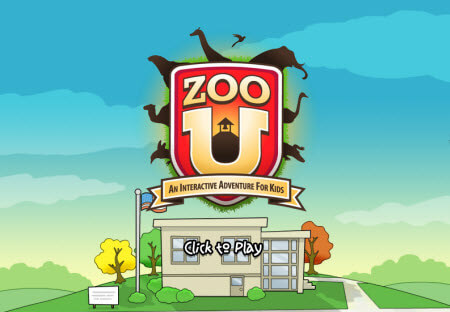 Zoo me? Zoo U.  Developed by 3C institute, Zoo U is an interactive game that seeks to help kids develop social and emotional skills. It does this by tracking and accessing players  skills as they play through the game. Players are given common day social situations that a child may come across in class, and then gives them options as to how to progress in those situation, all in a simulated virtual school setting. In doing so, it assess initial social skills and then assesses them as they progress to help instructors and parents gauge their child’s development.  The game focuses on six core social skills to : impulse control, empathy, initiation, communication, cooperation, and emotion regulation.

Warning: Your child may come out of the experience with expectations of wild animals living and playing inside schools.

Why does Zoo U make a difference? I haven’t played the game myself, but the game is reported to have positive effects on the social and emotional well being of the kids that play it. Developing social skills at a young age is important to a child’s  emotional well being,  their academic development, and their success in making friends.. Games like Zoo U can give a leg up to children that may be having a difficult time developing these skills by making the learning process fun and engaging. Likewise, at an early age repetition is important in the development of skills (It’s why they have you do your times tables so many times) but in social situations you may not always get that repetition that often need. Video games bridge that gap, as it gives the child unlimited opportunities to interact communicate with their in game peers.

That sound a bit like an advertisement, but I do think that games that are directed at developing social skills can be huge help in assisting kids who may have problems developing social or emotional skills. This stuff is important, as they really are the building blocks to being a emotional and socially healthy adult. We can all use some help sometimes, so why not make it a bit more fun with some Vidja Guymmeessssss

Now excuse me while I pitch Bioware a dark and gritty version of the game that gives you branching paths that all lead to the same silly ending.