I wanted to share a guest blog post I did for the Strong Museum of Play’s Play Stuff Blog during my summer fellowship there last year. The post entitled, Clones in the Archives: Console and Software Cloning Practices in the Early Years of Video Games, is a short look at how console cloning contributed to the global proliferation of video games in the 1970s and 1980s. It narrows in on cloning narratives around Pong Clones and Famicom clones (Famiclones) and seeks to understand if these narratives differ in meaningful ways. It also briefly reflects on doing archival research and the amazing opportunity I was given by the Strong Museum. 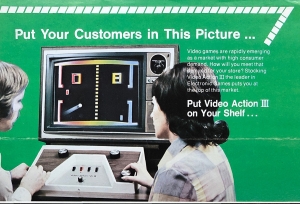 This historical piece has increasingly become a tent pole of my understanding around cloning practices more broadly, as well as foundation for situating how video game history favors specific narratives over other. Hopefully I’ll have some more pieces of this project to share in the future, but the Play Stuff Blog post should give you an idea as to where my research is heading.

“Hey kids, get off those video games and do your homework!”

“But Dad! These video games ARE our homework”

That’s the dream for many young kids, and it seems like that dream just may come true, at least for some lucky college kids in Korea. Sony has partnered with Sangmyung University Seoul to bring the first ever Playstation college course focusing on the development and branding of Sony Playstation products and games. As seen in the picture, Sony has created unique desks for the students, each with their very own Dualshock 4 and PS Vita. Is this insane? Yeah, kind of.

The class, which started today, is said to have weekly lecturers come in and speak about different facets of the video game industry. Will it be worthwhile? Will it make participants live and breathe Sony products? Time will tell. Next week’s guest lecturer is Kratos, who will tell you about how to kill Gods.

It’s certainly is a forward thinking tactic on Sony’s part to jump on the next wave of video game developers. With so many universities and schools beginning to include  video game design programs or classes at their school, it’s not that surprising that a major company has decided to invest in the next generation of developers. With the industry on the rise, getting the best and brightest students will be important for many companies. Still, I can’t help but think it’s pretty heavy handed; one look at the classroom an I can’t imagine the class is going to be very objective to the industry as a whole. However, it’s positive to see video game get their rightful place in the academic world, sponsored by Sony or not.

It’s still better than Sega’s attempt in the 90s in which Sonic indoctrinated children via a staff and student populations made up primarily nightmare inducing animals.

Forbes released their list of the 10 most powerful women in gaming today. In an industry dominated by men, the 10 listed women are blazing new ground for female game developers in the industry. Check out the list and get to know these 10 women shaping the game industry.

That’s all I have for today. Not failed attempts and failed humor or witty insight.

Can Video Games Teach Young Girls To Be Rich?

These two articles came out in the last few days, and they examine how children’s gaming is gendered, and ask the question “what are games teaching or not teaching our daughters”. The authors ask how video games can be used to teach young girls the attributes and qualities that young women often lack (like the drive to be the financial breadwinner) that young men seemingly gain. They evaluate video games as tools of socialization that are instilling these qualities in boys, and not girls.

Super Princess Peach teaches young girls to save the day by using their emotions.

Media at large paints women as the damsel in distress much more often than as a strong female lead, and video games are no different. The princess role is as old as writing itself, and characters like Peach and Zelda are certainly only modern interpretation. Even though we’ve seen Peach take the reigns in games like Super Princess Peach, Super Paper Mario, and every Mario Sports title ever (SHE CHEATS IN MARIO STRIKERS. YOU KNOW IT. I KNOW IT), lead female roles in video games are still rare.  Certain franchises have been more progressive than others, enabling players to choose between genders (See Mass Effect, Pokemon, etc) but the majority of story driven games are often centered around males; there’s some, but not too many. Likewise, games with female main characters tend to have their protagonist silent (see Metroid, Portal 2)

Final Fantasy XIII Prominently features Lightning as the main character…A lot of male gamers..didn’t like her (Then again they hated everyone in the game)

But is their hypothesis true? Can video games be used to make young girls more ambitious? Certainly. Why not. Hey, ok. Video games are inevitably a tool of socialization in today’s world; young boys and girls are learning lessons and characters from their on screen personas ( I learned how to be a battle toad from Battle Toads). Thus, it’s important that young girls have strong role models in their games, rather than merely pushing gender roles upon our young.  Likewise, it’s up to us to monitor and know about the games our kids our playing and to choose games and stories that reflect the ideas and attributes we want to instill in our kids.