The Pew Research Center, a nonpartisan research group that conducts polling and demographic research, has released 17 page long report on their findings about Gamers and Gaming. This is an incredibly insightful report for anyone conducting sociological research on current issues in gaming or  seeking the demographic make up of the video game community. It’s a pretty lengthy report, but I’ll try and break down some of the highlights.

The group posed the following questions to a survey of over 2000 Americans.

Additional probing questions were asked about video game causing violence, how racial groups were represented in games, and how video games represent women.

Let’s go over some of their discoveries!

The demographics of gender in gaming is similar to what the ESA reported earlier in the year, but there’s a considerable difference between the number of women and men who identify as gamers, perhaps signalling a disconnect between women and gaming culture.

Why is there such a big difference between people who play games and identify as gamers? It could be that by identifying as a gamer you’re admitting you are a part of a bigger culture that many respondents desire not to be counted upon. The term gamer may carry with it perceived connotations that aren’t appealing to more casual or infrequent consumers.

With regards to the questions regarding video games as  cultural and societal entities, the report found that a good portion of the population believe that video games can provide positive effects. 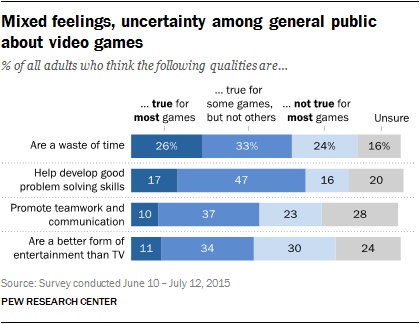 I believe this graph is a particularly important one, because it represents a practical and reasonable view of video games within society. As with any medium, video games have a varying range in terms of intellectual and interactive value; some games will be your action fueled titles that don’t challenge you to work out problems, while others can be great sources of cooperative play and brain stimulation. It’s unfortunate that the medium often gets labeled as being only its biggest titles (Call of Duty, Madden, GTA) when there are plenty of games that challenge players to think outside of the box, work together, or take witness to a wonderful tale.

The study also asked questions to respondents in regards to how they perceive violent video games as agent in creating  real world violence.

The majority of respondents did not believe that violent video games lead to violent actions, despite some groups believing they do. It’s clear that younger men and women disagree with the statement, but that the issue is still one that is very much up for discussion and debate among the community.

Lastly, we’ll look at the study’s finding on public perception of representation in gaming:

This one is a little surprising, as the majority of respondents didn’t choose to weigh in one way or another. It’s clear that more respondents believe that only some games exhibit poor representation of women and minorities, which is a fair statement of video games, but it is alarming that that a healthy portion believe that most games have poor portrayals. This shows that proper representation within video games of women and minorities is an ongoing struggle and that the general population simply do not know about it.

There’s a lot more in the actual report that I highly recommend checking out. This kind of data is rare, but it helps us gain a better understanding of how video games are being viewed in our society and what we need to work on as a community.  For sociologist, such data is invaluable because it gives insight to the social problems existing at the intersection of sociology and video games.

Charts and graphs provided by the  Pew Research Center

One thought on “Pew Research Center’s Report on Gaming & Gamers”