World of Warcraft may be the most sociologically interesting game of all time because of the massive community the game has fostered in its 12 years of being active.  In those 12 years Blizzard has made some dramatic changes to the game, with new areas, races, and elements being added in with each update and expansion. While fans have been more or less positive about these expansions, recently a niche crowd of the WOW population grew nostalgic for the World of Warcraft of the past. Thus a private server named Nostalrius was created to give players an option to play the original, “vanilla”, World of Warcraft just as it was when it released in 2004.

This form of game  duplication falls into a murky waters when it comes to piracy. As it stands, it’s impossible to play the original vanilla WOW on an official server. Blizzard, for obvious reasons, has a stake in pushing their newer versions of the game that feature updated elements and graphics. What the team behind Nostalrius did was provide fans with an option to experience ( or experience again) a very specific version of the game that will most likely never be released officially by the developers. While what the team did is technically piracy (they’re distributing a game they don’t own for free) they are distributing a game that, for all intensive purposes, is financially dead: Nostalrius isn’t charging clients for the product and neither is Blizzard. Legacy servers are not a new thing, several MMOs offer legacy servers that allow players to play the original versions of their games, but the majority of legacy servers are officially ran or sanctioned. With World of Warcraft being the most popular MMO of all time, it’s only natural that Nostalrius grew in popularity and eventually reached a client base of 150,000 users (  a mere fraction of WOW’s 5 million subscribers). Despite being a fan-made project not seeking any financial compensation for their product, Blizzard has sent the team a cease and desist letter to halt all distributing and running of the game.

The Nostalrius team will be shutting down their server on April 10th and active users are already preparing for the end of the game’s world: clients across the world are actively participating in pilgrimages across the game’s world as  symbolic measures to bring in the servers demise.  “We never saw our community as a threat for Blizzard.” said the team in their open letter to Blizzard offering the company their help in providing fans with an option for legacy servers. 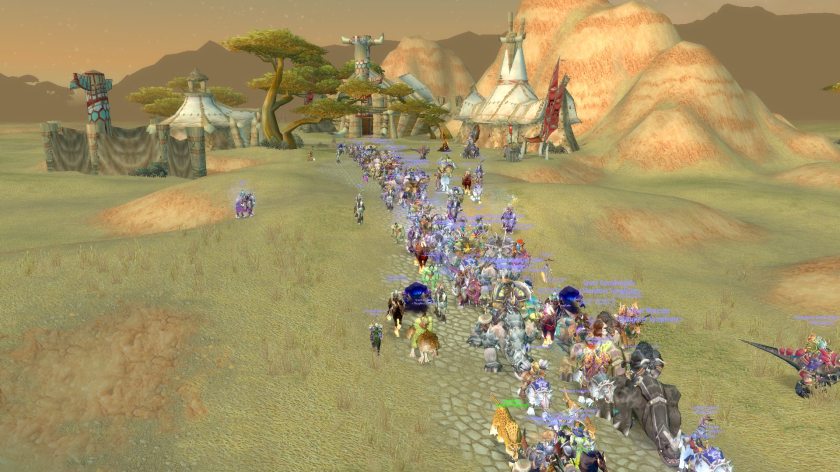 Cases like Nostalrius are particularly interesting in that they are instances in which a portion of a video game may simply no longer exist or be available to the general population. With video games slowing becoming more and more digital exclusive, certain games may become lost to time because the developers will no longer offer them or no longer have the means to offer them. In the case of WOW, fans came to Nostalrius because they were enthusiasts of something long-gone and fans of World of Warcraft as a whole. I’ve discussed these issues in the past, but it’s interesting to see the discussion come up around a very active game. Nostalrius and their community stark set on an in-game   pilgrimage to the apocalypse represents just how evolved and unique a video game community can become.. Some will revere the experience of playing the original game while other wills scoff and go back to the more updated version, but I do believe it’s an important thing to be given the opportunity to experience the game’s beginning. The in-game world of games like World of Warcraft are becoming more than just data online, they’re developing into shared experiences and worlds that hold sentimental value to those inhabiting them; when a online world ceases to exist it doesn’t simply disappear, it lives on in the memories and experiences of those who loved them. To a sociologists, we need to research and observe  how the advent of these digital worlds are effecting our social dimensions. If distant version of massive popular game can garner such a community, then certainly there is something more at work people merely playing a passive video game.

It is unfortunate that Blizzard will be forcing Nostalrius to shut down as it seems the server was only supplying fans with something Blizzard themselves are unwilling to offer. Perhaps one day Blizzard will head the advice of the team and provide fans with an official chance to experience the game’s beginnings. The story of Nostalrius reminds us to not take for granted the online games we love and play, because one they day they simply may not exist.