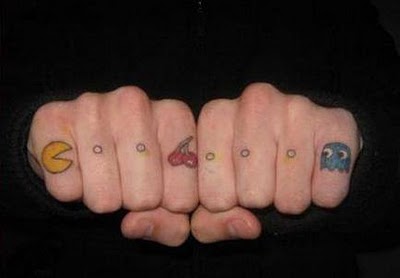 Wait, there may be gamers that tattoos? SHOCKING.

Pollsters Bill McInturff, and Fred Yang found considerable overlap between tattoo households and people who said they play videogames, though they didn’t know exactly why that is beyond both videogames and tattoos holding more appeal to “younger, downscale respondents.”

You don’t need a doctorate in Sociology to begin to hypothesize why there’s an overlap between the tatted and gamers, it’s fairly obvious that the driving force is that both mediums appeal to a younger demographic. However, as the population of Americans who play video games has grown beyond 50%, the correlation between Video Games and anything begins to weaken. If the majority of the population are playing video games, then it’s reasonable to make the prediction that many niche groups (In this example, people with tattoos) will probably be doing that activity as well. Thus, it’s not really news for “young group A” to have a correlation with playing video games, as that’s the majority of the population for young adults. MORE WORDS TRYING TO EXPLAIN THINGS.

Now that video games are gradually becoming melded into American sociolization, isn’t it time that we start to accurately discussing and evaluating the medium for the increasing part of society that it is? Let’s stop being surprised that people are playing video games. Hopefully we’re doing our own part here to increase the awareness about the study  and discussion of video games.