This is just a bit of great and funny news. A post that originated on “The Hawkeye Initiative”(which if you haven’t already gone and checked out you should do immediately) from a anonymous female employee of a gaming developer that was unhappy with a prominently displayed poster in their office shows how bringing to light issues of sexism can both be positive and fun (YEAH  TALKING ABOUT SEXISM IS GREAT!).

The poster in question:

Our CEO loves this picture. It is to all appearances his favorite piece of comic art for the game. He had it blown up poster-sized, framed, and displayed on the out-facing wall of his office. There, it looms over the front room like a ship’s figurehead. It is the first thing workers and visitors see when they enter the building and the last thing they see when they leave. This little lady’s undermeats have been the open- and close- parens to my work world for the last six months.

To give a little background, the “Hawkeye Initiative” is a an internet movement to replace female comic book characters in impossible or provocative  poses with the very masculine and alluring Hawkeye to comment on the depiction and representation of females in comic books. Essentially, they’re taking Powergirl’s skimpy poses and replacing them with bulging Hawkeye (Oh my!)

Thus, in keeping with the Hawkeye Initiative’s message, the employee got together with one of the developer’s artists and made this poster: 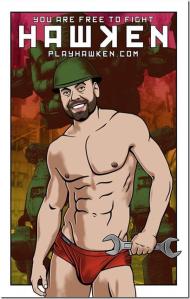 After replacing the posters, the CEO of the company had this to say to the employee:

“That was a brilliant prank. You called me on exactly the bullshit I need to be called on. I put up pictures of half-naked girls around the office all the time and I never think about it. I’m taking you and Sam to lunch. And after that, we’re going to hang both prints, side by side.”

Hey, that worked out. That was nice. The mastermind of this all also shared some insightful things that she learned from this experience:

This wonderful experience has taught me two things that I hope to carry with me for the rest of my career in STEM (science, technology, engineering and math) and in gaming. It taught me this:

We just haven’t been around enough for them to notice.

So what does this teach us? Nothing? That we should replace pictures of things we dislike with things we like? It just goes to show that Sexism doesn’t have to be a silently fought issue. While no one is suggesting that all bosses/ceos/ people in charge are going to react like this great boss, one has avenues to breach these matters. And it’s true, the gaming industry is filled with more progressive minded individuals than you would think, so perhaps it’s time for men in the gaming industry to wise up a little more to the junk that their female co-workers have to deal with.

Should we have a Hawkeye initiative for the video game industry? Nathan Drake taking on the poses of Lara Croft per chance? Ryu striking the same poses of his female counterparts? As I type this, I wish I had the drawing ability to make these so.